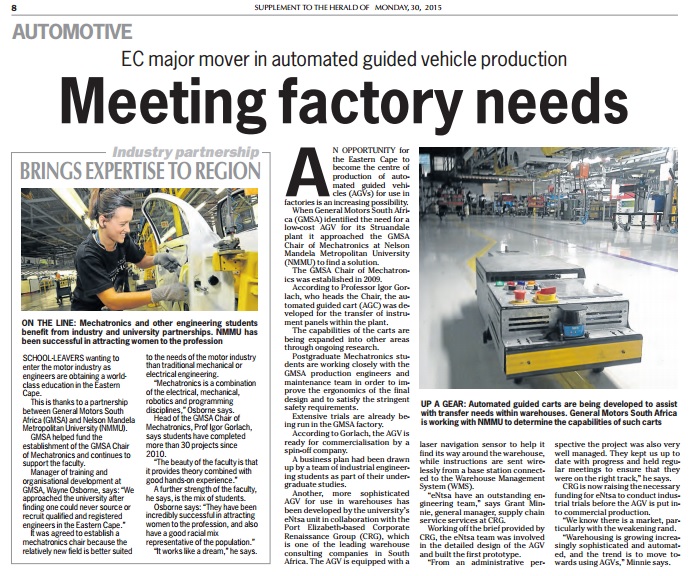 The automated guided vehicle (AGV) being developed within the NMMU was featured in Business in the Metro, a supplement of The Herald, on 30 November.

The article that appeared can be read below:

AN OPPORTUNITY for the Eastern Cape to become the centre of production of automated guided vehicles (AGVs) for use in factories is an increasing possibility. When General Motors South Africa (GMSA) identified the need for a low-cost AGV for its Struandale plant it approached the GMSA Chair of Mechatronics at Nelson Mandela Metropolitan University (NMMU) to find a solution.

The GMSA Chair of Mechatronics was established in 2009. According to Professor Igor Gorlach, who heads the Chair, the automated guided cart (AGC) was developed for the transfer of instrument panels within the plant.

The capabilities of the carts are being expanded into other areas through ongoing research.

Postgraduate Mechatronics students are working closely with the GMSA production engineers and maintenance team in order to improve the ergonomics of the final design and to satisfy the stringent safety requirements.

Extensive trials are already being run in the GMSA factory. According to Gorlach, the AGV is ready for commercialisation by a spin-off company.

A business plan had been drawn up by a team of industrial engineering students as part of their undergraduate studies.

Another, more sophisticated AGV for use in warehouses has been developed by the university’s eNtsa unit in collaboration with the Port Elizabeth-based Corporate Renaissance Group (CRG), which is one of the leading warehouse consulting companies in South Africa. The AGV is equipped with a laser navigation sensor to help it find its way around the warehouse, while instructions are sent wirelessly from a base station connected to the Warehouse Management System (WMS).

“eNtsa have an outstanding engineering team,” says Grant Minnie, general manager, supply chain service services at CRG. Working off the brief provided by CRG, the eNtsa team was involved in the detailed design of the AGV and built the first prototype.

“From an administrative perspective the project was also very well managed. They kept us up to date with progress and held regular meetings to ensure that they were on the right track,” he says.

CRG is now raising the necessary funding for eNtsa to conduct industrial trials before the AGV is put into commercial production.

“We know there is a market, particularly with the weakening rand.

“Warehousing is growing increasingly sophisticated and automated, and the trend is to move towards using AGVs,” Minnie says.