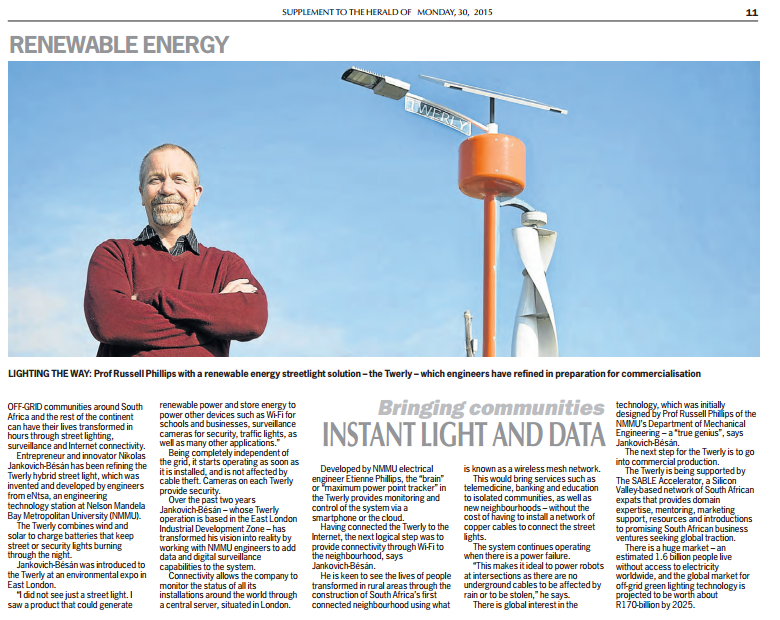 Twerly, a streetlight that combines wind and solar to charge its batteries was featured in Business in the the Metro, a supplement of The Herald on 30 November.

The published article can be read below:

OFF-GRID communities around South Africa and the rest of the continent can have their lives transformed in hours through street lighting, surveillance and Internet connectivity.

Entrepreneur and innovator Nikolas Jankovich-Bésán has been refining the Twerly hybrid street light, which was invented and developed by engineers from eNtsa, an engineering technology station at Nelson Mandela Bay Metropolitan University (NMMU).

The Twerly combines wind and solar to charge batteries that keep street or security lights burning through the night.

Jankovich-Bésán was introduced to the Twerly at an environmental expo in East London.

“I did not see just a street light. I saw a product that could generate renewable power and store energy to power other devices such as Wi-Fi for schools and businesses, surveillance cameras for security, traffic lights, as well as many other applications.”

Being completely independent of the grid, it starts operating as soon as it is installed, and is not affected by cable theft. Cameras on each Twerly provide security.

Over the past two years Jankovich-Bésán – whose Twerly operation is based in the East London Industrial Development Zone – has transformed his vision into reality by working with NMMU engineers to add data and digital surveillance capabilities to the system.

Connectivity allows the company to monitor the status of all its installations around the world through a central server, situated in London.

Developed by NMMU electrical engineer Etienne Phillips, the “brain” or “maximum power point tracker” in the Twerly provides monitoring and control of the system via a smartphone or the cloud.

Having connected the Twerly to the Internet, the next logical step was to provide connectivity through Wi-Fi to the neighbourhood, says Jankovich-Bésán.

He is keen to see the lives of people transformed in rural areas through the construction of South Africa’s first connected neighbourhood using what is known as a wireless mesh network. This would bring services such as telemedicine, banking and education to isolated communities, as well as new neighbourhoods – without the cost of having to install a network of copper cables to connect the street lights.

The system continues operating when there is a power failure.

“This makes it ideal to power robots at intersections as there are no underground cables to be affected by rain or to be stolen,” he says.

There is global interest in the technology, which was initially designed by Prof Russell Phillips of the NMMU’s Department of Mechanical Engineering – a “true genius”, says Jankovich-Bésán.

The next step for the Twerly is to go into commercial production.

There is a huge market – an estimated 1.6 billion people live without access to electricity worldwide, and the global market for off-grid green lighting technology is projected to be worth about R170-billion by 2025.