Hot Rock™ is a system that allows energy collected during the day to be stored for later conversion to electricity at a 1 to 5 kW scale. The system comprises a parabolic trough, a rock bed and a heat engine. Solar thermal energy is collected using the trough and stored in the rock bed. The heat can then be converted to electricity using a heat engine. 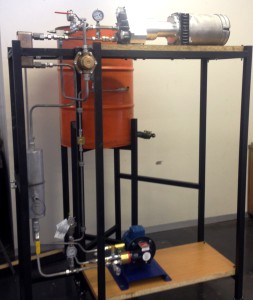 Advantages
• The conversion of solar heat to electricity is currently only economically viable at large scale concentrated solar power (CSP) plants. The Hot Rock™ system has overcome the economic challenges of using solar heat for electricity generation at domestic scale by the use of low cost materials and an integrated systems approach.
• The rock bed of the Hot Rock™ system reduces energy storage costs associated with batteries and lowers the risk of theft due to the low value of the storage medium (rocks). The system does not have flammable, explosive or toxic materials commonly used in battery systems, thus reducing health, safety and environmental risks.

Progress
NMMU has developed a prototype Hot Rock™ system that converts solar heat into electricity. The prototype and process is currently being optimised and integrated but the key challenges have been overcome.

• Provision of power in off-grid and remote areas to power cell phone towers, dwellings and farming equipment;
• No requirement for flammable and valuable fuel for electricity generation;
• Reduction of the risk of theft due to low value components used; and
• Reduction in energy usage and carbon emissions by replacing the need for diesel generators.